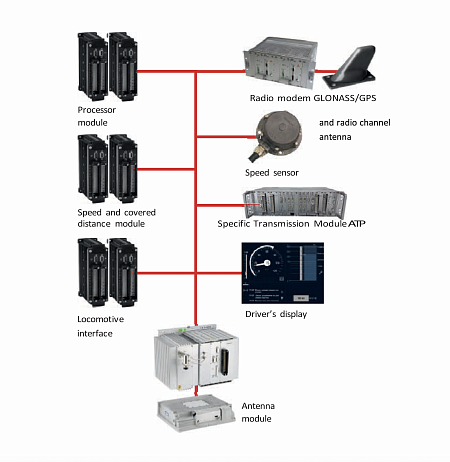 The radio-based train control system (RBTC) improves the efficiency of railways due to an increase in traffic capacity, reduction of maintenance and energy consumption expenditures, as well as wear reduction of tracks and rolling stocks.

The onboard safety system on locomotives, which is a part of the RBTC system, includes a processor module, speed and covered distance modules, interface with locomotive equipment, receiving and antenna modules for receiving information from balises, speed sensors, and the driver’s display, as well as a radio modem, GPS antenna and a radio channel.

Onboard equipment also comprises two half-sets of train integrity device systems, one of which is installed on the tail car. They continuously control the pressure in the brake conduit and if it drops below the set level they initiate sending the alarm signal to the radio block center.

Locomotives that are equipped with the onboard safety system and supplemented with the Specific Transmission Module of Continuous Automatic Locomotive Signaling system (ATP) can both transit the sections with a radio block or with conventional automatic line block. The switch from one system to the other is performed automatically; the driver just needs to approve it by pressing the button on the display of the driver’s panel board.


The RBTC system changes the established approach to efficient train control and allows increasing the traffic capacity of lines only thanks to an increased number of locomotives equipped with onboard safety systems. The first system was implemented in Kazakhstan and it has been successfully operating there for many years making it possible to cope with ever-increasing cargo traffic without new investments into the infrastructure.

In 2019 a unique project was implemented by 1520 Signal in Mongolia, on the Khoit — Ulaanbaatar — Zamynuud section, which is 1111 kilometers long. The key factor that makes the project unique is the first-ever application of the radio-based train control system (RBTC) with moving block-sections over the existing systems of relay interlocking.

Absence of necessity for time-consuming design and labor-intensive construction of wayside equipment on open lines has made it possible to successfully install the system in a short time frame. With minimum investment, it became possible to deploy a modern train control system on the line with traditional signaling equipment, which improves the level of safety and the traffic capacity of the line only by increasing the number of locomotives equipped with RBTC onboard safety systems without additional investments into the signaling infrastructure.